PINK MOON by director Floor van der Meulen will have its World Premiere in competition at Tribeca International Film Festival!

When completely out of the blue Iris (29) is told by her father Jan (74) that he has had enough of life and wants to die, she is forced to face the total absurdity of the situation. As his unsettling deadline approaches, Iris decides to ignore her brother’s watertight action plan. She strong-arms her father into answering the one question that matters to her: why? Without ever getting a satisfactory answer, she eventually tries to find herself a way to deal with her father’s very last wish. 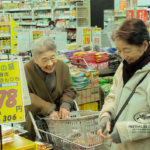